Unless you are living under a rock I am sure that by now you are aware that the Boston Bruins have fired long time coach Claude Julien. I wanted to start this post off by giving thanks to the greatest coach in the history of the Bruins organization. Claude inherited a Boston dumpster fire that head been coached by Detroit Red Wings *prodigy* Dave fucking Lewis. That group was a ragtag squad lead by recent free agent acquisitions Marc Savard and Zdeno Chara. The roster also included budding young superstars such as Milan Lucic and Phil Kessel. And who can forget the Kobasews, Sturms, and Metropolits of the late 2000 Bruins. Claude managed to lead that team into the playoffs in his first year and bring the hated rival powerhouse Habs to game 7 of the first round in one of the most memorable series I can remember. Sturms Beauty in Game 6

After that season I was hooked on Claude. He implemented a defensive style game, where every single player on the roster would be responsible in their own zone. Claudes Bruins grinded down other teams on the forecheck and physically punished anyone with the puck. Some saw a boring brand of hockey at times, but I always felt his system created an interesting chess match between two hockey minds.  In 2011 it all came together when Claude was able to coach the Bruins to their first Stanley Cup, and for that, I will always be grateful. 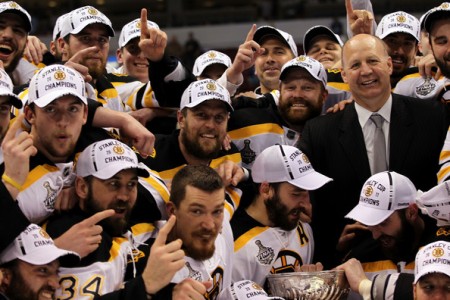 Eventually, we would see another cup run, which was followed by the Bruins Front Office displaying some of the worse asset management ever, comparable to my 10 year old smashing buttons on my NHL17 dynasty mode squad in the trade window. Claude no longer had the luxury of running 4 solid lines and was asked to change his style to the current NHL (even if he didn’t have the roster to accomplish that goal). It would be comparable to LSU no longer running the ball with their 6’3″ 260 Heisman hopeful running backs and telling the team they were going to air the ball out 65 times a game. It just was not going to work.

6 years after the Cup Run and over the last two years we have seem almost improbable end of the season collapses, that had more drama than an episode of Teen Mom 2 (highly recommend, btw. if the bachelor is your dirty pleasure, instead of teen mom, reevaluate your life.) This has led to my last memories of Claude throwing his hands up in the air, murmuring to himself “fuck me” and punching tv monitors.

But one thing is clear, Claude never lost the locker room. Unlike in New Jersey, where he was fired after John “Mad Dog Madden” shot a puck at him in practice. (Fucking Mad Dog, huh? What a penalty killer, hope he’s somewhere in Toronto at a Dave and Busters parking lot pretending he’s on a 5v3 penalty kill in the Cup Finals.) The players here in Boston, vouched for their coach. It has been reported that after the collapse against Detroit a few weeks back, Neely was going to fire Claude. But Marchand and Bergeron told the front office they wanted to play for their coach. Unfortunately, Riley superstar Nash and Co. could not get the results they wanted (SHOCKER).

So here we are, a coach with an over .600 win percentage in 10 seasons, being fired. What went wrong? I don’t fucking know. Maybe it has to do with the front office and their dogs shit acquisitions (liles, stempniak, rinaldo, hayes) because Jeremy Jacobs refuses to have a team commit to a rebuild ( need that playoff money, baby). Maybe in a changing NHL, a defense first, slow tempo style will never work. Maybe the Bruins have too many passengers on a squad that shows little to no commitment. But the right move was made.

Sometimes sex gets stale with one person and you need to change it up. While banging a guy named Bruce may not seem like a great rebound kill, it may be what the Bruins core needs to get their shit together finally. To stick with the sex analogy, the Bruins were once Mr. Cool back in their day, and now tell their story of banging the hottest girl from their high school. Unfortunately, they got complacent. They gained 45 pounds, dropped out of college, smell like pizza and broken dreams, and live in their Aunts basement. Now they bang any desperate lady at the local bowling alley that farts in their direction. Claude was the hot girl, and Bruce Cassidy is the Bowling Alley sweetheart who just hasn’t caught her break in life yet. Maybe the Bruins will realize banging a coach like Bruce Cassidy isn’t that sweet and they need to get their shit together. Because no team with their talent is winning a Stanley Cup with an interim head coach.

And quite frankly, with their play lacking, why would any coach want to go there? You get to inherit a bad lineup, and have a heavily involved old boys club of a front office breathing down your next. And on top of that, you get the biggest collection of assholes, that are the Boston Media, expecting a cup ASAP.

The Bruins are in turmoil and the front offices handling of this situation proves it. They fired Claude and did it on the day of the Patriots Parade, when little to no media would be available. Then hot head, and irrational President Cam Neely was nowhere to be found at the presser. This shows an Organization wide issue of a lack of accountability. Cam Neely is a coward of a President. He makes decisions in the heat of the moment and will never be there to back it up. Now after using these strong words against Cam Neely let me say this, I love everything Cam Neely is as a person and as a player. But what fans need to understand is that just because they were one of your favorite players, doesn’t mean they will be great in a front office. Cam Neely, SUCKS, as a President. Doesn’t mean I don’t love the guy, but Cam should be thinking more about his next role in Dumb and Dumber 15, and not about what players the scouting department should be targeting.

Get Rid of Neely. Give Sweeney a few years to try out his plan. DO NOT TRADE TOP PROSPECTS. Jeremy Jacobs, don’t rush shit, we don’t need to push for a playoff run again by acquiring guys who will be playing in the swiss league next year for 2nd round picks. You’re 15 dollar beers and 10 dollar tortilla chips and buttcheese should cover your mortgage for the next few years. And fucking beat the Sharks tonight so I can pretend Bruce Cassidy is the second coming of JFK and the bruins are going to the fucking moon. *When in reality we will be staring down another mid teens draft pick and another summer of depressing memories.*