Alright you guys, it is official, I am going a little overboard with buying shit. I have such a heavy addiction to online hockey shopping it is actually a little ridiculous. Over the last few weeks I have made a few purchases using this app I found out about a little while ago. If you didn’t notice the image well fuck it is SidelineSwap. This website is FUCKING AMAZING.

WARNING: This app will cause you to spend your money in ways you never knew imagined. You will buy things that are completely unnecessary and excessive. ENJOY.

No but for real this app/website is pretty sweet. They have more than just hockey too, for you golfers out there.

So recently I bought a new Easton T-Flex shaft that was made pro stock for the Colorado Avalanche I’m guessing a million years ago. Picked it up for $35, to me a fucking steal. Did I need a shaft? Absolutely not, but whatever I got a piece of ancient history. At the time I had three perfectly usable men’s league twigs so the purchase was absolutely not needed, but fuck it.

Anyways, last week I decided to hop back on this bitch and I struck gold. The best thing about this app is it is basically Ebay for sporting goods. You can make offers and they can choose to accept or reject them. This kid on there had two pro stock Easton SE 16s (top 3 favorite twigs of mine) for sale. Nice sticks that were made for Patrik Elias and have the graphics of the year later EQ50. They were listed at $150, which is a fucking steal for two twigs anyways, but I sent the dude an offer of $100 thinking eh why the fuck not. Well, sure enough the dude took the offer in literally 5 minutes. So now I am the proud owner of another piece of childhood heaven.

To give you guys a better idea about the app, you can list shit on there of your own, like if you have an old pair of skates or gloves, but you can obviously also buy. I believe you can make trades as well. They have everything from pro stock new gear to used NHL shit. They have Jagr Czech jerseys, pro socks, and everything in between. Any thing you can think of is basically on there, I almost even bought an NHL gitch bag from the Preds. It is extremely easy to use and you can message sellers as well. When you order items you are not charged until you “accept” the item(s). Basically this means once they are delivered you have a time frame to say whether the item is up to standards or is “as advertised”. So this helps save you from buying a new stick that is in fact used or slightly used.

One thing to mention is that although I have never sold anything on the site, I believe there is some sort of seller’s fee. I don’t see how they would be able to run without that, I think they take a tiny cut of the transaction, maybe like 5% but I think most sellers just make that up in the price or shipping costs.

Anyways, there you go guys, go get some nice new shit for the summer. Most of the stuff is extremely cheap. I have had nothing but good experiences on this site, shipping has been extremely fast from everyone I have bought from as well. I got those two Eastons from Alberta and they shipped to Central New York in a week, which to me is pretty damn good.

By the way, cheers to fucking warm weather, go crush some beers this Friday in the rink parking lot and show all those youth hockey coaches you still got it. 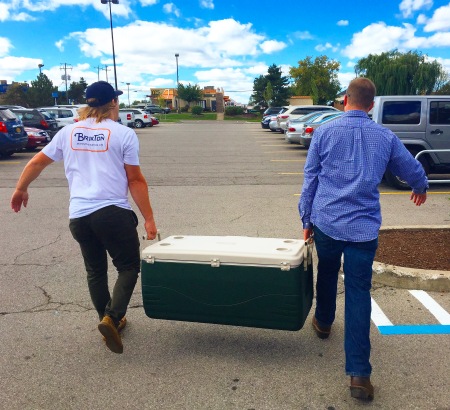 Hey my name is Cooner and I am a blogger for The Morning Skate who sleeps with new hockey equipment. I hope you enjoy some profanity filled thoughts of mine as well as honest opinions and ideas about hockey and life. Hope to share some great stories and get some laughs. View all posts by Cooner