Hey John and fans of the Leafs, SUCK IT!

The past week has been awful for Islanders fans. Just as we were beginning to heal from a franchise player leaving, he shows his true colors (which were blue and white all along) and releases a shit show of a Player’s Tribune letter to the Islanders faithful. If you haven’t read it yet, you should.

The letter reads like a break up letter written by rich boy that dated the poor girl at school and had to break up because his parents told him so. Despite the fact that he truly and deeply loved her. (See James Spader in Pretty in Pink for reference) Douche bag move there Bahd! 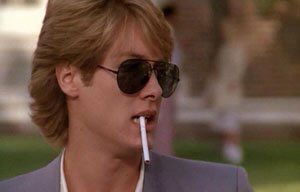 I get the love of a hometown team, I do, but don’t write us a break up letter while you are sleeping with our friend in a tropical resort and then complain about making the decision.

Feck off! You don’t understand and it shows.

John we loved you and you loved us back for years, but the manner in which you agonized about the decision left us with the bad feels. Whether you meant to make us feel that way is debatable, but the fact of the matter is that we do. To make matters worse you have Auston Matthews watching you the way that we used to, it’s like the way Spiderman watches Iron Man – Total Bromance.

Whether you like it or not, your return to one of the three stadiums that we play in will be met with cheers the first time that (likely Matty Martin) hits you. You made us feel salty and that will never go away.

Yes! Yes! Yes! Keeping the drive for 5 alive from Seattle, but not without the occasional clean up. Been an Islander fan for much longer that I should have been. Seen the ups, the 4 cups and the downs. I guess you could say I am a masochist with a love for hockey and the Blue and Orange. Even when Seattle gets a team, I will always stay true to the Isles. I write about this sport we love and spend a ton of time with my 9 year-old daughter at the rink. I also direct a beginners hockey program. The best thing in the world is helping those kids reach their goals. View all posts by Isle5cleanup

Can someone please do this next season? @terminatorshockey
Choo choo bitch.
The boys are back
Don’t forget to check the weather forecast possible chance of dust!
What are some that he missed?!
Always have to protect your tendy!
×
%d bloggers like this: