The Vegas Golden Knights are currently +money right now (+110 to +115 depending on your bookie). All you gamblers out there need to jump on that immediately. The way the road teams have played in this playoffs so far and the way the Golden Knights have bounced back after their losses, it’s a no brainer. The Vegas Knights are the better team. They play well on the road and they haven’t lost back to back games in the playoffs yet. This series has a similar feel to when they played the Sharks and I see no trouble as the Knights head to Washington. 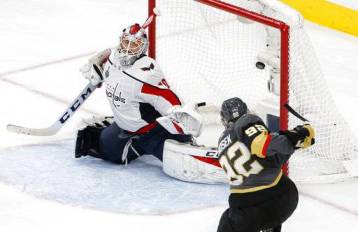 And as for my prediction of Knights in 5? Papa isn’t worried, not one bit, even though the series is tied 1-1 heading into Washington. The Capitals didn’t win game 2. The Knights lost it. If that doesn’t make any sense to you than stop reading now, because you’re an idiot. Game 2 was one of those games where you have a feeling that the other team is destined to win. Nothing went the Knights way even though I think they played an overall better game than the Caps through 60 minutes. If Vegas scores that goal and Holtby doesn’t make the save of his career, the series would be without a doubt 2-0. That’s why hockey is the greatest game. You can get outplayed, but a few bounces in your favor can turn the tides completely. Which is why I feel about tonight. The Knights know what they need to do and they have the coach and the players to bounce back.

Now with that being said, I did watch the game after I knew the result because Papa had a game himself. (We won 14-2….no big deal). Knowing the outcome mixed with pulling for Vegas my analysis might be skewed. I thought Vegas played a better game than the Caps overall. They outshot the Caps 39-26. It’s not like the Knights to put up that many shots and only capitalize twice. The big problem was their power play. Going 1 for 5 isn’t bad as a percentage, but you have to be better at home. Special teams is so important in the playoffs and is often the difference between winning and losing. Vegas prides themselves on their discipline and work ethic and I have all the confidence in the world that they put a complete game together and win game 3. Enjoy it everyone because it will be over before you know it.