About a week ago we received the following tweet:

@Morning_Skate Ever heard of a rink announcing they will no longer be providing pucks for pickup, stick and ?, youth and adult games? pic.twitter.com/8yWG7pC6mE 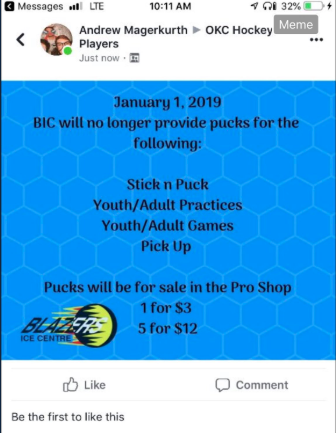 Ummmm, what? So naturally, I was not at all pleased:

Can you imagine going to open hockey and the rink doesn't supply the pucks? What world are we living in here?? https://t.co/vsBgjVt2MW

I cant wait to talk about this on the pod this week. Does anyone else have a personal grudge with local rink managers? Zero of the week for sure. https://t.co/vsBgjVt2MW

And then I found out this isn’t the only rink to do this:

Since when do rinks provide pucks ? Must be an American thing or something ,Cause that has never been the case here is southwestern Ontario.

So where we live, the rink has always supplied pucks for open hockey or open stick sessions. It may have been like 7-8 pucks, but pucks are pucks and thats what you need to play hockey. Now I totally get that rinks shouldn’t have to supply pucks to local organizations whether its youth hockey, high school or college. They are organizations that have players pay their dues and somewhere in those costs is probably a puck fee. My problem is that when rinks start taking pucks away from us heroes out there trying to live the dream then this world is way more fucked than I originally thought. Lets be honest, when we go play in an open hockey setting more than likely we’re tuned up and the last thing we’re going to be thinking is that we need to bring pucks. I can see why rinks wouldn’t want to supply pucks because of rink rat thief’s but that is the business you signed up for. People have been stealing rinks pucks for pond hockey for years so get off your high horse and stop pretending like you’re some sort of rink manager martyr making a difference in the world. Hey buddy, give us a bucket of pucks, expect to have 3-4 of them missing and then go home to your husband or wife or kids and leave our happiness out of it.

When Me and my brother were kids at the rink we would steal the dick rink managers lunch. He still put the pucks out tho. And the guy made a hell of a ham and Swiss