In case you hadn’t heard, here’s the brief version of what we have been told from multiple sources, including some who were in the arena: The Thunderbirds were awarded a controversial goal when their coach Andre Niec, who was suited up for the game, deflected a shot that hit the corner of the net or post, and was awarded a goal.

Well, the first shoe to drop in all of this occurred tonight, because as we were chatting with someone in the arena about what they saw, we were sent a message from a league source who said that the officiating supervisor has pulled all refs from FHL games for the rest of the season, meaning that at the moment, the FHL does not have refs for this weekend’s games. 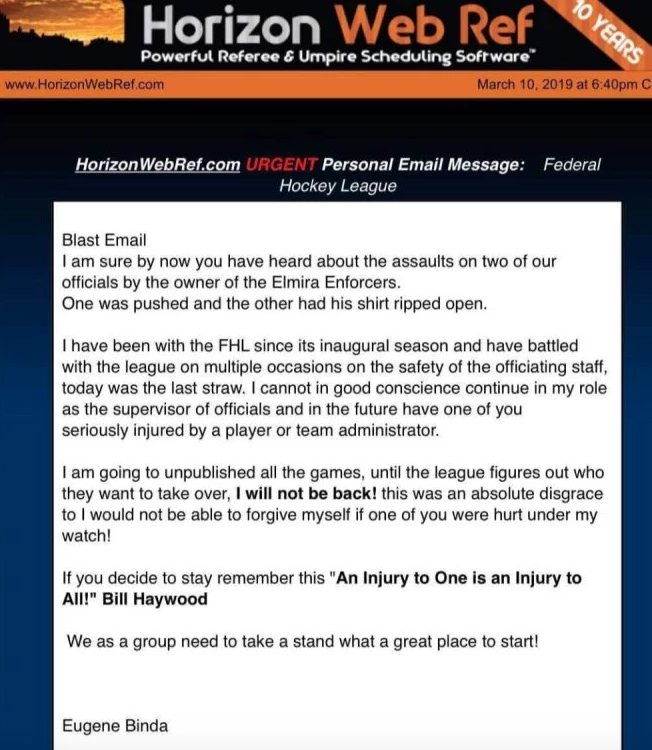 If you know what the Federal Hockey League is then this makes all the sense in the world to you. This is the league where degenerates go to play to say that they “play pro hockey” in their Instagram profiles all while beating the hell out of each other and “living the dream” for as long as they can. I guess the closest example of the Federal Hockey League would be either the league in Slap Shot or the AAFL if you continuously watch players blast the quarterbacks on repeat. This league is the Wild Wild West and has been for years.

Having said that, this is why the article makes so much sense. Again, the fed is essentially a beer league where you can hit and fight and act like an asshole. Sure, the competition is definitely better than most beer leagues but the antics after the whistles are all the same. In what other league can you have a coach score on a deflection? Where you have a GM push and rip the shirt off a ref, with one being a cop? We talk often about the abuse officials on the podcast and it doesn’t get any worse than the Fed. It’s so bad that I almost put the blame on the refs themselves for not knowing what they’re signing up for.

I think the best part of this story is the email blast sent from the supervising official. This quote may very well wind up on my gravestone.

Way to rally the boys, Eugene.

It’ll be nuts to see what happens the rest of the way. If you’re reading this and you’re thinking about reffing one of these games please do us all a favor and wear a GoPro. That is so must watch television right there.

Can someone please do this next season? @terminatorshockey
Choo choo bitch.
The boys are back
Don’t forget to check the weather forecast possible chance of dust!
What are some that he missed?!
Always have to protect your tendy!
×
Loading Comments...
%d bloggers like this: