Josh Ho-Sang wasn’t here with Bridgeport for his 1st practice after #Isles sent him down. Coach Brent Thompson: “As far as I know right now, it’s a couple of days just to collect himself and go from there.” I asked if he does expect Ho-Sang to report: “I really don’t know.” #NHL

Thomas Hickey on Josh Ho-Sang: “Obviously a very skilled good player and a misunderstood smart young guy. Whether it’s here or somewhere else, I wish him the best. Hopefully it’s here. It would be good to have him back.” #Islanders #Isles #NHL

What an odd career Ho-Sang has had thus far. Having been a first round pick, 28th overall, Ho-Sang has always been highly regarded for his skill and explosiveness but there has always been off ice issues. I mean, how many players do you hear oversleeping in the middle of camp while trying to make the team? 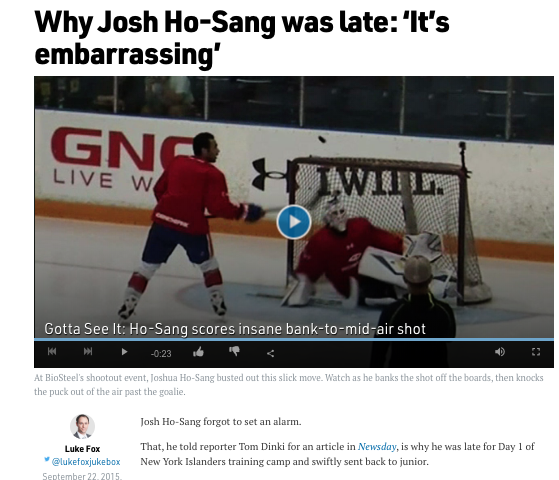 In his short NHL career, he hasn’t exactly lit it up but he also hasn’t played terrible. Never really given a chance on a top line, or really a chance at all, Ho-Sang has been vocal to the media about his treatment playing for the Islanders.

Josh Ho-Sang doesn't mince words when it comes to his recent season in this interview with @StapeAthletic. https://t.co/lW7nmMRG2K pic.twitter.com/eCXvhifMbW

When training camp wrapped up this year it was to everyones surprised that he was waived and had to pass by 30 other NHL teams to make it to Bridgeport. Analytical nerds across the country started playing with themselves at the thought that Ho-Sang was a free agent and surely will go somewhere, that is, until he never received a call.

So this is where we are now. A guy who thinks he’s better than he is isn’t reporting for a team that he’s probably too good to be on. Are you ever sick and tired of being sick and tired? Josh Ho-Sang for sure is. I hope he can figure his shit out because when he’s just playing hockey and focused on being a stud, the kid can fucking wheel.

Lamoriello: Ho-Sang's rep asked for a trade, so we told him not to report for a few days while we worked on that.

Lamoriello: Didn't want to disrupt Bridgeport's prep for their season starting this weekend. If there's no trade to be found, Ho-Sang will report to BPT. "Once he goes to Bridgeport, he's there."

Lamoriello: Even though you know you're being fair and honest with a player, sometimes they don't see it that way. So we take a step back and see what's out there. "Then you can look somebody in the eye and say, it is what it is." Added that Ho-Sang has done nothing wrong.