Dallas Stars head coach Jim Montgomery was fired on Dec. 10th “due to unprofessional conduct inconsistent with the core values and beliefs of the Dallas Stars and the National Hockey League.”

The vagueness of the Stars’ explanation created speculation that Montgomery may have abused a player — the league had just addressed high-profile abuse allegations at the Board of Governors meeting and released a “four point plan” to combat illicit conduct on Dec. 9th.

In 2019, Mike Babcock (accused of mental abuse) and Bill Peters (accused of racism and kicking players)  were fired following allegations of abuse. Marc Crawford was put on “administrative leave” (accused of homophobic slurs and kicking and choking players). Crawford has actually been in therapy  since 2010  in order to address his issues.  However, it later came out that Jim Montgomery’s issue was not abuse, but alcoholism. To this day, though, how exactly his alcoholism impacted his job performance is not clear.

I first learned of Jim Montgomery’s existence when I discovered The Morning Skate in 2019. I forget how I came across the site, but I read Whales’ review of Out of the Woods, the documentary about the 1993 Maine Black Bears National Championship. 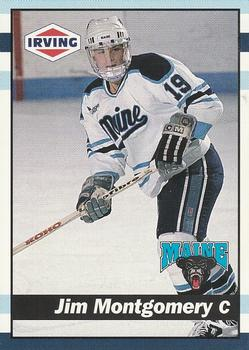 The documentary is awesome. A freshman Paul Kariya absolutely lights up the NCAA on a team captained by Jim Montgomery. He seemed pretty likeable, funny, and eloquent in the doc.

So his firing this season for “unprofessional conduct” struck me as bizarre. Montgomery seemed beloved by his college teammates and seemed like a legitimately special leader. His Stars’ players were also surprised by his firing.

Jamie Benn was “shocked” and said he loved playing for Montgomery.

"We'll deal with it as a team, and as a group, and keep moving forward."

Tyler Seguin said “looking forward to him being my last coach in Dallas.” Then a single sad tear slid forlornly down Tyler’s face.

Montgomery means that Jamie Benn now has had 6 different coaches (4 for Seguin). This kind of surprised me, aren’t the Stars usually good? Ben Bishop is like 12 feet tall.

But deeper than that, firing based on “off-ice” issues represents a workplace culture that is overbearing and too touchy. Especially in sports – which are in the business of entertainment – firing a coach for an off-ice, nonviolent issue seems counterintuitive. You don’t want to support someone’s legitimate problem; but do hockey fans really care if a head coach parties?

In a league that has legalized fighting, why does the NHL not embrace its freaks, geeks, and black sheep more?

We’re not exactly a G-rated sport. We do the punch in the face thing. How does not holding your liquor here and there disqualify participation in graceful barbarism? The guy has a hockey lip for god’s sake.

If there was an at-work incident with Montgomery’s alcoholism, there is no trace of it on the internet. Montgomery straight up ignored the question from Pierre LeBrun about what specifically led to his firing:

When it came out initially that his firing was due to “off-ice issues,” I thought it was odd. GM Jim Nill said it had nothing to do with current or former players, confusing those who thought Montgomery may have abused someone. Then it came after the firing that it was due to “alcoholism” – is that really the only reason? The Stars’ position is that they are not revealing details leading to the firing out of respect for Montgomery and his family.

I understand that alcoholism is a disease and a real problem. Trust me, I grew up with it. Maybe I can be convinced that GM Jim Nill or whoever put Nill up to firing Montgomery has his best interests in mind. I just can’t help but think it’s just about keeping the Stars’ image clean by not having a substance abuse issue associated with the team. What’s so weird, though, is that there’s no real story that the firing is chalked up to.

So what’s embarrassing about Jim? Did he grab an intern’s ass? Did he call Ben Bishop a pedofile in front of management? Did he dress in blackface while acting in a college play? I just can’t respect the “alcoholism is worthy of firing” narrative without some actual bad and unprofessional conduct.

Half of Whit and Biz’s stories with guests on Spittin’ Chiclets involve “getting in one.” To fire someone because they participate in the “work hard, play hard” seems super hypocritical to me. A culture that condones boozing should be willing to work with those of us that fall off the wagon and can’t self-regulate. Who knows, maybe the Stars tried to feed Jim coffees at team dinners instead of wine.

Functional alcoholics who work normal jobs are continuingly given a pass as long as they show up to work and do the dang job. I worked with a Parks Dept. employee who would rip shots all day and do a drunken 15 laps during lunch when the pool was closed. Best garbage dude at the park, actually.

But in the world of sports, putting in your hard day of work is not enough. Another set of rules governs, a standard that pro sports owners seem to think the masses want: the clean cut, straight-shooting, conservative Christian Hallmark card ideal.

I’m tired of athletes and coaches being held to superhuman standards. The fact that a 50 year old man only has one DUI when his record is dragged through the mud is frankly impressive.

And no one should be looking to pro athletes and coaches for too many life or political lessons. They are entertainers. If you are in the business of morality, though, isn’t the best lesson here that a person can conquer a mental illness with the help of his community?

Why is alcoholism alone shameful enough that an organization has to distance itself from an otherwise likeable and successful coach?

Is substance abuse really a character flaw that makes you incapable of doing your job? If it does get to that point, and you really are in the business of helping people — what the hell good does it do Jim to fire him? How does that stain on his record help him?

So I’m just calling a blanket “Bullshit” on any firings of NHL staff justified by substance-abuse issues. Teams don’t care whether the person is really healthy. They just care that their team image is squeaky clean.

All that said, I give Jim Montgomery all the credit in the world for acknowledging his issue with alcohol and making a genuine effort at recovery. In an interview with Pierre LeBrun, Montgomery gets emotional talking about the impact on his family.

Six months out from the firing, he holds no resentment towards the Stars and says the right things to “kiss the ring” and stay in NHL good graces (like thanks for firing me and sending my life into a tailspin after I had a .597 winning percentage for your sorry asses and was loved by my players).

While I wish the Stars could have kept him on board and provided support while Jim addressed his health, I think he will get another shot as a head coach in the NHL.

Puckraker grew up skating and retired after a Tier III NYS tournament appearance with the Great Neck Bruins. These days, Puckraker is a lawyer living the dream from New Orleans, where there are no hockey rinks. View all posts by Puckraker

Would love to see the SEC in NCAA division 1 🦎
Cut to the middle and see what happens
Legend
Never give up, never surrender
What tournaments are you playing in this year?
I don't see anything wrong here
×
%d bloggers like this: