Hey everybody, I’m back with a recap of what happened week 1 of the Leafs’ season. They’re averaging 7.5 goals a game. crazy stuff. It was a short week as they started with a win in Winnipeg vs the Jets.

Balanced Team Effort really noticeable in Leafs win or Jets. No leaning on just one player any more. This season should be really awesome.

The Leafs smoked the Jets 7-2, and at the same time, made them wish they had signed another goalie other than Steve, I forgot how to stop the puck,  Mason.

Other than winning the game, which was awesome, we also saw the big guns get their first goals of the season. In order, Kadri, JVR, Nylander, Marleau (x2), Marner, and Mathews all got on the board and killed any potential ‘when will they score’ narrative around those players.

You know who didn’t look good? Patrik Laine! I’ll just leave that there.

Other than the goal scorers, the penalty killers also looked great killing off 8 penalties. I don’t know about you, but I found the amount of penalties a little off-putting. Nobody likes it when their team gets a bunch of penalties obviously, but the game would have been way better to watch if there was more 5 vs 5 time.

Thursday saw my pal and yours, Marty Marincin get put on waivers. Unfortuanely nobody claimed him. Quite surprising considering his wonderful ‘advanced’ stats. I guess GMs actually watch games instead of just staring at spreadsheets.

A really big move, although it doesn’t seem like it at first, was the trade for Calvin Pickard.

It gives the team some depth if either McElhinney gets injured, or God forbid Andersen is out for any period of time. I think Kaskisuo is still to inexperienced to come up to the Leafs, and after Sparks initial stint in the ‘tank year’, I’m not too keen on seeing him play too many games for the Leafs. Babcock then said that they would look at moving an AHL goalie.

Babcock indicated that with the #Leafs adding Calvin Pickard into the fold, they may have to make room by moving a goalie in the AHL.

Saturday’s game saw Rosen go in for the team’s new grit grinder Borgman, and Moore went in at 4C in place of Fehr. But those two moves weren’t even close to the story. The Leafs seemed to score at random in the first, looked like hot garbage in the second and then seemed to figure things out in the third. I thought Nylander and Gardiner looked outstanding. I just hope the team cleans up their D zone coverage before they play the Blackhawks because at times it looked like a dog park defence.

Grit Grinder of the Week 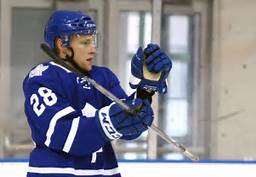 My grit grinder this week is Connor Brown. (Hyman a close 2nd) Despite being on the fourth line, (I really think he should be on the the third) this guy doesn’t bitch and just goes on the ice and plays his heart out. This tweet pretty much sums up his night last Wednesday after killing off all those penalties.

Brown is a complete player. After being drafted 156th overall in the sixth round, he worked his ass off to be where he is now. He can play defensively, he has the hands to score twenty goals, and he has the heart of a lion out there. That, and he probably took less on his last contract to remain a Leaf. He’s a team guy for sure. I can’t think of anyone that doesn’t like this guy as a player.

Next week the Leafs play Chicago on Monday, New Jersey on Wednesday, both at home. They then go to Montreal to play the Habs on Saturday. Lets hope they break that God awful losing streak against that friggin’ team. #GoLeafsGo

Have a great week everybody.