this is laugh out loud funny 😂 pic.twitter.com/oeo8uVXm7n

Before I get into this, for everyone who thinks I’m a terrible person for laughing, take a chill pill. Clearly, if this kid got hurt I would’ve been concerned, maybe. But he didn’t so relax. 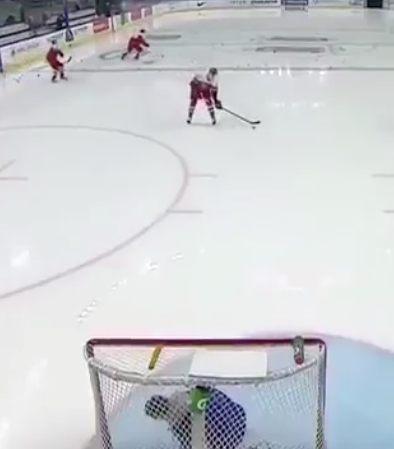 I don’t know about you, but I’ve been here before. I may be a beer league all star but I can’t tell you how many times I’ve buried my head in the ice and fired a puck on net with an unsuspecting victim in front of me. At first, I feel bad but then I laugh afterwards. It’s definitely my bad but at the end of the day a laugh and an “I’m sorry” normally do the trick. Why is this much funnier? Because these guys are world class prospects. Some of these players will be playing in the NHL some day so you think that they’d be able to take a shot with their head up. Even though this could’ve been avoided I’ll chalk this up to an accident and we can move on. 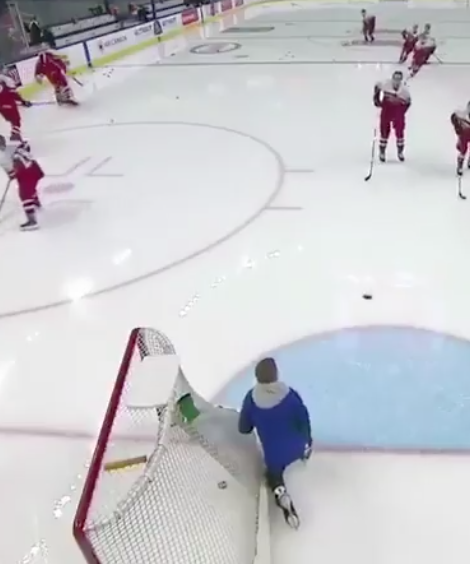 Okay, this one was a little bit more aggressive. The team has already done a couple laps and should’ve seen that you know, THE NET WAS OFF. The only thing I can think of is that snipers got to snipe. I know back when I played competitively, some players will try and pick a corner no matter where the net is. That right there is a skilled guy being a skilled guy. Also, look above. That is what we like to call an oh shit moment. Somebody fucked up right there and it’s the guy standing like he accidentally broke a garage window shooting some pucks. If i was the Game-ops kid, I probably would’ve went home after this first shot but I have to respect his loyalty to the job.

Hahahah, you think you had a bad day? Scroll up and watch this video again. Not once, not twice, but three time this kid almost got himself caved in by a disk of rubber. The first two were a little bit more on the other team but the last one has me convinced that the hockey gods do not like this kid one bit. He has every right to beg for mercy and slam the door behind him. Props to this kid because you know the saying, “He’s a hockey player”… kind of.

For all the wet blankets out there, I’m sorry. This is a place where we can laugh and joke about things. Not every little thing in life is so serious. If you want to be mad and actually get upset about it, I’m sorry. I cued up the music below to as a gesture of good faith.