Laying in my bed last night I was bored and wondering, hmm who have we drafted over the years. I wish I never went down the rabbit hole because it just put me in a shitty mood before bed. Here is a lovely reminder of the haunting draft picks since the 2000 NHL Draft. These are all 1st and 2nd round draft picks. Many awful, some unlucky (see Blackburn and Cherepanov RIP)

2001- 10th overall Dan Blackburn, Goalie 63gp, had nerve damage which forced him to become the double blocker goalie. Sad his career got cut short and sad for us as well. This guy was supposed to be the real mother fucking deal, but we will never know.

2002- 33rd overall pick Lee Falardeau, 0gp, I don’t know why we took him, he never eclipsed 15 points in college at Michigan State. Horrible pick, hate everything.

2003- 12th overall Hugh Jessiman, 2gp 0 points, Biggest bust in Ranger’s history, huge freshman year at Dartmouth, declined sophomore year, then got injured and only played 12 games junior year. I don’t know why he didn’t go pro after his sophomore season. Oh well fuck us. Hugh if you’re reading this, don’t kill me, but what in the actual fuck happened man!? Passed on guys like Getzlaf, Burns, Perry, and Bergeron. Hugh Speciman can fuck right off.

2003- 50th overall Ivan Baranka, 1gp 0 points, what a fucking bust as well. Yet again I don’t understand drafting this kid so high. He played two years in the WHL putting up only 38 points in 122 games. Not worth the 50th overall pick if you ask me.

2004- 6th overall Al Montoya, Goalie 168gp, didn’t really crack an NHL roster until 2010. 6th fucking overall people. Guess what you don’t do in the first round. THAT, especially that high.

2004- 36th overall Darin Olver, 0gp and 6 AHL gp, then left to go play across the pond and has never come back. Had some very good years in the DEL with over a point per game. Why he never stayed here is beyond me, kid from British Colombia, 36 points this year in 52 games in the DEL. Another Rangers butt fucking via the cock of the NHL Draft.

2006- 21st overall Bob Sanguinetti, 45gp 6 points, only 5gp with the Rangers and that’s all you deserve Bob. Guess who was picked right after this plug…Claude Fucking Giroux….

2007- 17th overall Alexei Cherepanov, He was the promising prospect that died on the bench when playing in the KHL. He was having a great season with 13 points in 15 games before passing. He would be 29 years old at the moment. Had NHL size at 6’1’’ and broke Ovi and Malkins KHL rookie goal mark with 18. Look at this Russian NailGun. 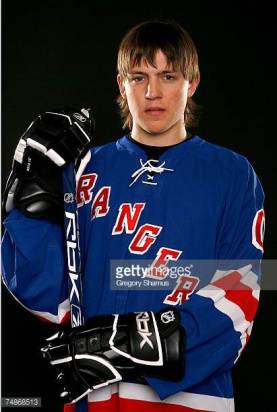 2007- 48th overall Antoine Lafleur, Goalie 0gp. Never played any pro hockey whatsoever. In the QMJHL he had a BRUTAL four year average of .884 save % and an even worse 3.82 GAA. Why did we even waste a pick on this kid? He isn’t a bust, we drafted POORLY.

2009- 47th overall Ethan Werek. 0gp. Pretty big swing and a miss here by management, AGAIN. Kid had about a point per game in the OHL, sucks we got the shaft, yet again.

2010- 10th overall Dylan McIlrath 43 gp 5 points. I hate to do it to this guy but what the fuck were we thinking?! This was in 2010, you’re telling me the organization couldn’t realize by this time that hockey was changing? He would have been unreal in the 90’s but not post 2010. He had a billion pims in the WHL which is fucking nails but didn’t produce much offensively. Topped out at about 25 points his second year in the WHL. The worst part about all of this is the fact this draft was FUCKING PACKED!!! Take two seconds and go look at the 2010 draft and then get a bucket because you will need to throw up at the names that were called after this kid. In my opinion almost as bad as Jessiman.

Did okay with what we had form 2011-2013 no need to shred that. Didn’t have too many high value picks honestly. Too man deadline deals, shipping away picks. CUP RUNS YAY!

Now let us take a little peak at what the Rangers have actually done well in the past 20 years or so. The one thing I will admit is the fact that management has done a great job finding later round gems. Here is a list of what I think to be valuable draft picks.

2001- 40th overall Fedor Tyutin, 872 gp, 264 points. Solid D Man over the years. Good mileage out of a second rounder. Absolutely no complaints from me on this one.

2002- 240th overall Petr Prucha, 346 gp, 146 points. Solid player, would have loved to see play more games. The fact there were 8 rounds is hilarious and this guy played over 300 NHL games. Knee injury took a toll on his career and he could never turn it around.

2005- 12th overall Marc Staal, 758 gp and counting, only 164 points. Least favorite of Ked and honestly myself but a decent pick all things considered. Although he annoys the shit out of us, he has been a stable(ish) defenseman for a long time in the NHL. BUYOUT!!

2006- 54th overall Artem Anisimov, 622gp and counting, 309 points. Good numbers for a second round guy almost at the end of the round. Can’t complain having almost a .5 ppg with a second round pick that late. Good career to date and overall nice pick.

2007- 168th overall Carl Hagelin 485 gp and counting, 221 points. Another great mid round steal who has played a good amount of games. Adds depth to a team and was one of my favorite Rangers for a while. Again, almost a .5 ppg. Not too shabby.

2008- 51st overall Derek Stepan, 594gp and counting, 415 points. Great numbers for a later second round pick. Can’t complain about drafting Step, he was one of the backbones of the NYR for a long time down the middle. Helped us achieve a lot but also seemed to never quite get us there. All in all phenomenal value in Stepan.

2008- 20th overall Michael Del Zotto, 563gp and counting, 210 points. Had some extremely good years as a Ranger’s D Man, two seasons with 37 and 41 points. Also had some rough years however, that is why I will say this draft pick just scratches the surface of a great pick. Notable D Men taken after D Zott are Roman Josi and John Carlson.

2009- 19th overall Chris Kreider, 378gp and counting. 219 points. My favorite Ranger since he joined the team in the 2012 Stanley Cup Playoffs. What an absolute monster of a power forward…when he wants to be. He still has to prove his worth as a first rounder. He needs to be more consistent and improve his scoring, but hopefully next year he can stay healthy. For the most part, the Rangers did a very good job with drafting Kreider. 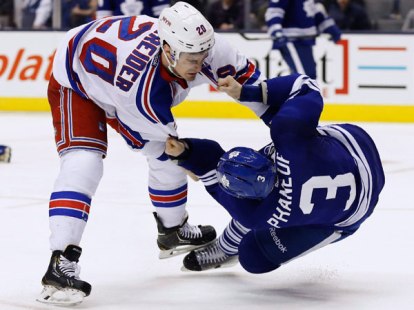 2010- 157th overall Jesper Fast, 287gp and counting. 98 points, really coming along as a Ranger. Starting to become one of my favorites. Also, what a great value so far for this kid. Works hard and plays two sides of the puck. More good things to come from him hopefully. Something is to be said about mid-late round Swedes in the NHL.

2011- 15th overall J.T. Miller, 356gp and counting. 188 points, best of luck in Tampa Miller. Good Ranger, bitter sweet to see him go but oh well. Awesome first rounder, can’t really ask for more. I am sure his point total can only go up as well, ride Stammer and Kuch as long as you can buds.

2012- 28th overall Brady Skjei, 166gp and counting. 63 points, love this kid, hope he has a relatively high ceiling. Set for a lot of playing time over the next few years, we will truly see his worth in a year or two. Stay tuned folks. At this point, great pick by the rangers. Skates well and has offensive upside.

2013- 80th overall Anthony Duclair, 213gp and counting. 89 points, good skater has a little bit of upside depending on his team. Probably will max out as a decent third line player, but all in all not a bad 3rd round pick up.

2013- 75th overall Pavel Buchnevich, 112gp and counting. 63 points. Too early to tell but I love the pick up in the third round. Potential for 55-65 points as a ceiling if the Rangers turn it around, if not look for him to produce around the 40-45 range per year.

I will leave it at that since the kids from 2014 to now still have time. Sad to see though that even from 2014 we have only drafted 3 kids that have stepped on NHL ice. Of those three we have only seen them play 11 games. Go give this link a bang and see the horror. Hopefully the future yields much, much riper fruit. 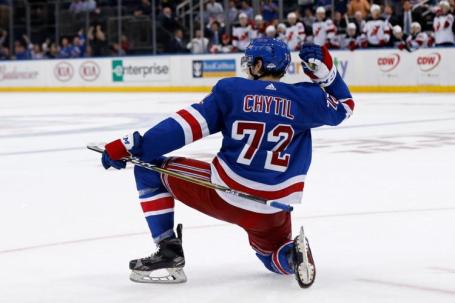 Also feel free to leave comments on any platform. I love the feedback and banter about all things NHL.

Hey my name is Cooner and I am a blogger for The Morning Skate who sleeps with new hockey equipment. I hope you enjoy some profanity filled thoughts of mine as well as honest opinions and ideas about hockey and life. Hope to share some great stories and get some laughs. View all posts by Cooner