The Winnipeg Jets are a scary, scary team. They have the perfect balance of everything you need to win a Stanley Cup. Anyone who has watched them know that they should be favorites to not only win this series, but win the Stanley Cup. How can any team defend against them? They are way to physical and way too deep. The Predators were an excellent team and their game 7 loss last night had nothing to do with goaltending. When the Jets are on their game, there is no team that can beat them. With that being said I don’t think this will be a walk in the park for the Jets. Here is my preview for the Western Conference Finals. 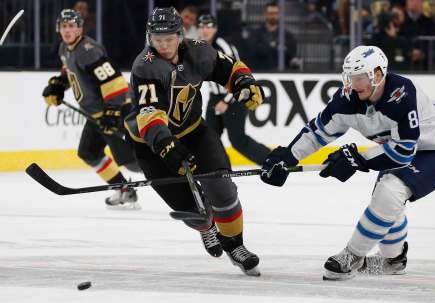 I’ve bet against the Knights two series in a row and I have been wrong. Their speed and transition were a enough to take care of business against the Kings and Sharks. Here is the thing. San Jose and LA ARE NOT the Winnipeg Jets. The size, speed, and physicality of the Jets will be too much for any team to handle, even the Golden Knights. The only way I see the Knights winning this round is if they trap the shit out of the Jets. The Knights are a very disciplined team when it comes to their forecheck. It works because they have the speed to transition to then create offense. They will have to frustrate the hell out of the Jets and not allow Winnipeg to create anything in the neutral zone. Vegas also has to keep it simple in their own zone. Don’t allow the Jets to get on the puck and bang the defense. Chip the puck out every chance they get. Muck it up and play that ugly style in order to frustrate the Jets to the point where they make bad decisions are turn the puck over. I believe the Knights could pull this off because they capitalize on every chance they get and I don’t see that changing. Also, having the home ice advantage and being able to play match ups will be key for the Vegas Golden Knights.

(I will put this picture in every blog I do concerning the Jets.)

This should be an interesting matchup. I definitely think that the Jets have the upper hand with their depth and perfect balance all over the ice, but the Knights are so annoying to play against that it could cause some problems. My official prediction in Winnipeg in 7. I don’t think it will be a blow out series, although if Vegas strays from the identity it can get ugly quick.