This afternoon the Carolina Hurricanes, who previously played as the Hartford Whalers from 1979 through 1997, announced they would wear a Whalers road green throwback uniform for *two* games in the upcoming 2018/19 season.

Going with the design the Whalers wore from 1985-89 (and then again for the 1990/91 season), the Hurricanes will be in green from head-to-toe, helmets, pants (no, not Cooperalls), socks, gloves all match what the Whalers wore during this era. Sadly, no “Pucky” logo on the shoulder, the beloved mascot was removed from the Whalers uniform for the 1985/86 season.

As mentioned earlier, the throwback uniforms will be worn on two occasions, both times against the Boston Bruins who were a geographic rival of the Whalers, and in a move that’s pretty awesome of the Hurricanes one of the throwback games will be *in* Boston, giving fans of the area a chance to see their former team again in-person, wearing the historic uniform. 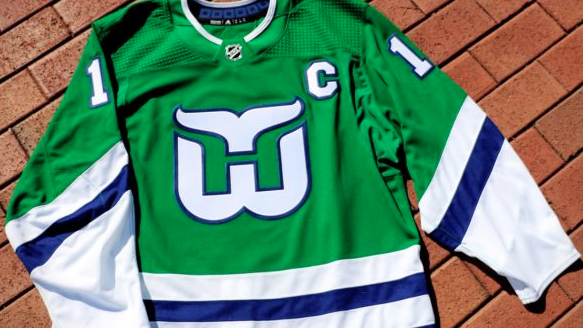 Awwww yeah, the Whalers jerseys are back. These jerseys are gonna be so sweet and I totally can’t wait to tell everyone how much I love vintage oh my god yaaaa, was what I was going to say. I was going to write this blog pretending like I care that these jerseys are back but to be honest I want to go against the trend. The only people who should be fired up about this are Whalers fans and Carolina fans, considering this is their teams new third. Do I think they are? I’m not sure. If I was a Hartford Whalers fan I’d be rattled that they would allow any team other than Hartford to where them. These jerseys could bring back some tough memories with nothing else to look forward to then the Hartford god damn Wolf Pack. If I was a Carolina fan I’d be rattled because it entirely goes against their brand. Red and black to green and blue is a tough pill to swallow. Also, all of the teenage asshole kids who wear Whalers snapbacks are the worst. I bet they couldn’t name 5 people on any of those Whalers teams, so pretenders get out of my face.

Having said all of this and judging strictly on jersey appearance, these are actually pretty nice. The H and W hidden logo is one of my favorites and this is how green and blue should properly be displayed, talking to you Vancouver. While were on the subject, that team never should’ve switched from the black red and yellow but thats neither here nor there. All in all, I think the Jerseys are cool but I’m not going to sit here and fanboy it up like 99% of the hockey world.

What are your thoughts on the jerseys? How many will be sold? If you were to buy one, what player would you choose?