Backstrom reveals he had two fractures in his finger. He won’t need surgery.

Another day, another tough ass hockey player. Nicklas Backstrom has been one of the most underrated players in the National Hockey League for YEARS now. Don’t think so? Look at his stats: 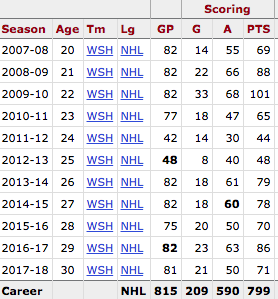 I mean, come on man. That’s almost not fair. Backstrom broke his hand earlier in the playoffs and STILL put up 7 points in 5 games.

He has some of the best eyes in the game, as seen on this silky pass.

What an incredible pass from Nicklas Backstrom to Alex Ovechkin pic.twitter.com/CkrTpHIJzW

You could give me 1,000 pucks with two perfectly healthy hands and every single one of the passes would go off the glass and out because of the fourth liner in me. Backstrom on the other hand has the precision of a healthy Aaron Rodgers.

NHL fans, let’s not forget that LeBron James played in the NBA finals with a “probably broken hand” as well. I mean, check this out.

Gruesomely injured LeBron James battles through push-ups carefully before game 2. Watch as he works past his severely injured wrist to barely push himself up. Absolute warrior. pic.twitter.com/lhkXJBRuzx

I find it funny when people get all upset at hockey twitter for being a bunch of tough guy/girl hardos. Yeah, we might be, but every other sport definitely isn’t helping their own cause.